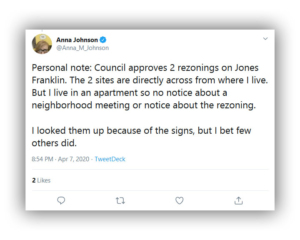 On Feb 4, 2020, Raleigh’s City Council disbanded the city’s Citizen Advisory Councils (CACs) that had been in place for nearly 50 years. CACs provided an opportunity to engage the public and allow a two-way information flow between the public and the city government.

At the time the council issued a promise of new citizen engagement tools that would be far superior to the CACs.  For instance, they felt CACs were not representative enough and even discriminated against renters, although CACs never had any rules barring attendance by renters.  The council planned to create these new tools by hiring a consultant to develop a new process.  It is unclear whether that consultant would or would not be taking input from the public.

CACs provided the public with information on many topics.  But, here I will address the rezoning process addressed by Anna Johnson’s tweet.

The first meeting was used to present the details of the case to the public and to answer questions and gather any concerns the public may have had with the case.  The applicant took the results from this first meeting and had the opportunity to make adjustments to the plan to address the public’s concerns.

At the second meeting the applicant brought back a revised proposal with any changes made to answer questions or address the concerns expressed at the first meeting.  At the end of this second meeting a vote was taken by those present expressing their opinion either for or against the proposal.  The results of that vote, along with the expressed concerns, were documented and presented to the Planning Commission when they reviewed the case.

Most importantly, all citizens could be kept aware of all such rezoning cases in their neighborhoods simply by signing up online to receive their CAC’s monthly newsletter and meeting agenda.  So, no one had to rely on seeing a sign as noted in Anna Johnson’s tweet.  The newsletter kept citizens informed of the rezoning application from the first CAC meeting through the Planning Commission meetings and finally to the public hearing held at the City Council.

Unfortunately, this process was eliminated when the council disbanded the CACs in secret, behind closed doors and with no public input.

Also, unfortunately, no replacement has been put forth and no consultant has been hired to even begin the process of creating a replacement.

To date, all the council has done is to add one public neighborhood meeting, to be run by the applicant at a time and place of their choosing, to replace the minimum of two meetings described above.  And, as noted by Anna Johnson, only property owners within 500 feet of the subject property are notified of the meeting.  This one meeting provides no method for the applicant to hear the concerns of the public and bring back a modified plan to address those concerns.  And this one meeting takes no vote of the public to judge the level of concern of the public.  The council actively removed the requirement for a public vote from the meeting process even though it was in the proposal presented to them.

So, city council eliminated two CAC meetings that were run by the CACs and replaced them with one neighborhood meeting run by the applicant.

And, most importantly, without the CACs and their monthly newsletters, there is no way for a renter or anyone else, renter or property owner, who is further than 500 feet from the subject property to be notified of rezoning cases that affect them and their neighborhoods.