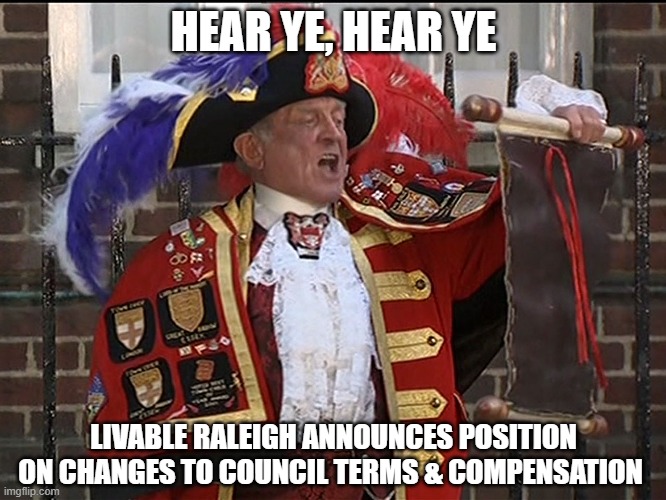 Livable Raleigh welcomes the chance to comment on proposed changes to the compensation and terms of City Council members and on adding seats to the Council.

We hope there is no repeat of the secrecy that surrounded the extension of current Council terms and the elimination of runoffs in elections where no candidate, in the first round, has the support of a majority of the voters.

We also note that the elimination of runoffs makes it highly likely that candidates will be elected with less than majority support. Indeed, in elections with crowded candidate fields, the “winner” may be elected with far less than a majority, and in fact may represent a faction that the majority strongly opposes.

To make these “winners” less accountable to the public, by giving them longer terms until the next election, is a bad — and indeed undemocratic — idea.

We support increasing the salaries for Council members. We do so with the expectation that Council members, once elected, will put the time into constituent service to justify higher compensation. Historically, we note that some members have not done so, complaining that their pay was insufficient to justify much of a time commitment beyond attending Council meetings and responding to special interests and campaign contributors.

With higher pay, all voters should expect that, in return, their representatives will listen to their concerns, keep them informed, and be voted out at the next election if they do not do so.

Voter Approval Should Be Sought

Especially after the secrecy of the recent changes to Raleigh’s election schedule and form of election (i.e., no runoffs, with a plurality of the votes sufficient to win), we believe any changes to Council terms, if pursued, should be approved by the voters in a referendum before being enacted.

Recent actions by the Council seemingly have been designed to constrain public input, and to limit what the public knows about what Council and the City Manager are doing. These actions include causing city elections to be postponed for more than a year, allowing current Council members to continue in office without the input or approval that elections provide.

Elections are the primary means of keeping local government accountable to city residents. Tampering with them is not just unwise. It is unscrupulous and undemocratic.

We support adding one or more additional district seats and recommend that there be an odd number of seats in total — including the mayor — to avoid tie votes. We believe strongly that with additional districts, Council members can be closer to their constituents, and candidates will be able to run for office without needing to raise exorbitant amounts of campaign money. As things stand, Raleigh’s population is nearing 500,000, meaning that the existing five districts will average 100,000 residents each. In our view, that’s too many to allow for effective representation and constituent service.

Electing Council members at-large, by contrast, forces candidates to spend large sums and reduces their ability, once elected, to be in close contact with voters, who are spread across the city. For these reasons, we oppose adding at-large seats and recommend, instead, that as Council expands, the at-large seats be eliminated.

Finally, we think this topic merits a great deal more public discussion and input than it has received to date.

Note – This statement has been sent to the Mayor, the Members of City Council and the City Manager. It has also been sent to media outlets as a Press Release.

You can find a discussion of the Pros & Cons of these proposed changes to Raleigh’s City Council along with a link to a survey you can complete here: https://livableraleigh.com/finally-you-get-to-tell-city…/