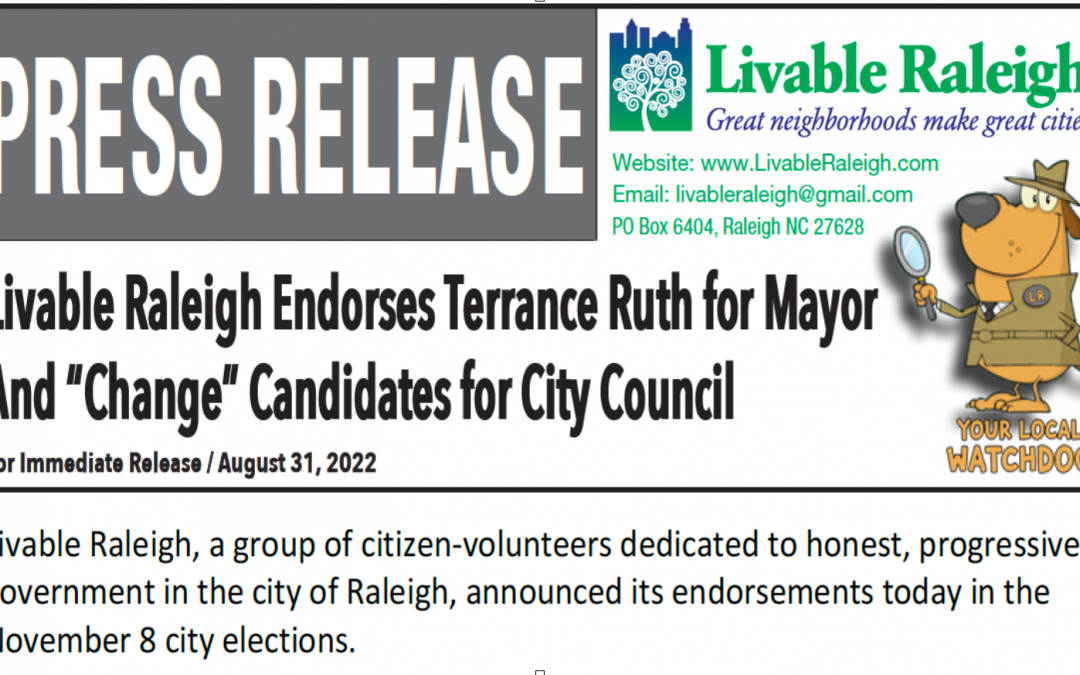 “Terrance Ruth is a breath of fresh air for our city, a man Raleigh will be proud to say is our mayor,” said LR Chair Marsha Stickford. “His election will restore the integrity and decency to the mayor’s office that Raleigh voters could count on in the past, but that’s been missing these last three years.”

With Ruth at the Council table, LR recommends a slate of “change” candidates that, as a group, reflect our organization’s commitment to diversity, equity and social justice across racial, gender and age differences.

“Each of our endorsed candidates brings a unique, valuable set of experiences that, when brought together on Council, will help Mayor Ruth lead the way to Raleigh’s best future,” Stickford said.

LR is not endorsing any incumbents.

In three years since their election in 2019, Mayor Baldwin and her Council backers have systemically eliminated citizens from participation in their own government, even to the point of moving in secret to have the scheduled 2021 elections put off for a year, and changed from a non-partisan election with runoffs to a non-partisan plurality election with no runoffs and no primaries. They did this with the connivance of the N.C. General Assembly over the objections of Gov. Roy Cooper.

“In their devotion to the development industry which funds their campaigns, we believe the incumbent mayor and Council members who are running again abandoned the values that were Raleigh’s historic strengths,” Stickford said.

“Respect for neighborhoods, for historic landmarks, for racial equity and inclusion, for lifting up those in need, for a balanced approach to growth that accounts for citizen concerns as well as developers’ interests – none of these things seem to matter to our current mayor and Council members,” she said.

“The very qualities that citizens loved about Raleigh have been shunted aside so that real estate investors from across the globe can have maximum profits at our expense,” she said.

As a result, the city’s roads and infrastructure are overwhelmed, taxes are rising fast but can’t keep up with the demands of unregulated growth, and the agencies of city government, including police, fire and emergency response units, are hollowed out.

“Raleigh’s claim to a great quality of life is literally on the ballot this year,” Stickford said. “It’s time for a change before things deteriorate to the point of crisis.”

Livable Raleigh is a 501(c)4 organization comprised of volunteers. We have no paid staff. Endorsement decisions were made by members of the LR Advisory Committee based on direct observation of the candidates, their experience and values, and their responses to candidate questionnaires. Learn more about the candidates at City Council Elections