To collect (yard waste), or not to collect. That is the question. 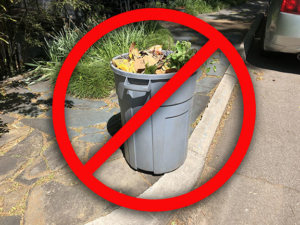 On Wednesday — yesterday — the city cycled back, forth and back again on the question of yard waste collection. First, it was off, suspended indefinitely. Then, it was back on, per a mid-morning announcement. Finally, in mid-afternoon, it was off again, except for a one-time sweep, beginning today, to collect limbs and branches from the recent storm.

The confusion is understandable. Having two guys (it’s always guys) riding on the back of a truck, and jumping off to hoist barrels and bags into the chopper was always a dubious approach — very labor intensive, heavy barrels leading to injuries, even heavier barrels if it rained. Our yard waste collection system was expensive for the taxpayers and dangerous for our sanitation workers, not to mention the obvious air pollution generated by all those trucks.

But now, in our post-Covid 19 world, social distancing does not permit two men riding side by side on the truck, just one. We’d need twice as many trucks to do the job, at higher cost and with more pollution.

In short, it’s time to re-think how we go about disposing of yard waste in Raleigh. Because the old system wasn’t very good, and for the foreseeable future, it’s become an impossibility given the dangers of the coronavirus.

How should we proceed? Here’s a few thoughts to get us started: