This Thursday night via Zoom: Is the $80 million “affordable housing” bond “better than nothing”? Or does it deserve to fail? 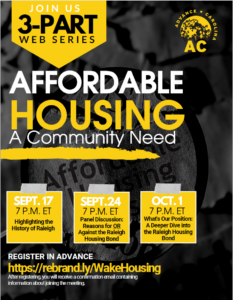 On Thursday, two nights from now, members of the Wake County Housing Justice Coalition will tackle the Final Jeopardy question regarding the proposed $80 million bond issue for affordable housing: Should you hold your nose and vote for it? Or vote against it and tell the City Council to come back with something a lot better?

You can watch us wrestle with this, starting at 7 pm, via Zoom. It’s free, but you have to register. Here’s the link:

As a member of the Coalition, I’ll be one of the panelists offering my opinion.

From the beginning, the debate over the bond has been between proponents of a “trickle-down” approach to helping those in need VS. a “bottom up” approach that would help the neediest directly.

I’m borrowing the “trickle down” language from debates over tax cuts for the rich as a way to lift the economy and eventually — somehow — help the poor.

In the housing realm, we’ve learned that the City of Raleigh has spent some $9 million a year on housing subsidies over the past 5 years — a total of $46.9 million. This was NOT bond money. The city has not had a housing bond issue since 2011, and the money from that very small one (just $16 million) is long gone. No, the $9 million a year was from the 1-cent property tax earmarked for housing plus some Community Development Block Grant money from Congress.

What has the $46.8 million bought us? It’s bought 2,709 units of apartment housing, almost all of which is priced for moderate-income renters. (Generous federal subsidies, plus market-rate rents, meant the city’s subsidy per unit was just $17,276.)

Only 87 apartment units — 3% of the total number of 2,709 — were priced to be affordable by low-income tenants.

Yet the city is quite proud of its efforts to help the poor by building housing that the poor can’t afford. How can this be? At the debate last Thursday sponsored by the Coalition, the Greater Raleigh Chamber of Commerce’s top government affairs officer, John Goodman, clarified it in a single word: “Volume.”

Build more middle-class units, the story goes, and the added supply will reduce rents across the board, with the benefits eventually trickling down to service workers and others earning a minimum wage or near-minimum wage.

Thus,  the $80 million bond issue proposes to add $10-16 million a year to the $9 million already being spent, and the new money will pump up the Volume even more. (I’m giving a range for the $80 million because I don’t know, and no one knows, if it will be spent over a 5-year period, an 8-year period, or something in between. Like everything else with this bond, the details about it have been vague or non-existent.)

Does more Volume really benefit the poor? Or does it simply reduce rents and/or add to the profits of market-rate apartment developers?

On the other side of the debate, Coalition members have argued that the entire $80 million should be targeted to those in the greatest need as identified by the city itself: 16,685 households with incomes below the poverty level who are currently paying more than HALF their income in rent.

Think about that: You make $10 an hour, which means your income is about $20,000 a year. After taxes, you take home, what, about $1,300-$1,400 a month? And your rent is $800 a month. You’re a working mom, with a child, and you are going broke. Or you ARE broke, and you’d be homeless except that Wake County is paying for you to live in a cheap hotel during the pandemic so you’re not out on the streets catching Covid-19 and spreading it.

There are thousands of people in Raleigh who are literally destitute — as the Coalition’s Yolanda Taylor put it during the debate, they are “at the crossroads of hope and despair.”

And yet the City Council, which proposed this bond, and the Chamber of Commerce, which is running the campaign to pass it, want the voters to conclude that “something is better than nothing,” and if the bond is voted down, the poor will get nothing. Grudgingly, after failing to act since February, the Council on Sept. 1 agreed to target about 20% of the bond money to the neediest. Up to then, the commitment to the poor was 0%.

The Coalition’s alternative is simple: Keep spending the $9 million to help moderate-income people get a slightly lesser rent. But spend the bond money —  ALL of it, all $80 million — helping those at the bottom who need help the most.

And while you’re at it, preserve and rehabilitate the older, smaller houses in our historically African-American neighborhoods that are in Final Jeopardy for sure — jeopardy of being torn down as the development industry moves in with “from $500,000” replacements.

The business it has NOT been in: Building “affordable housing” that is truly affordable to the people who need it most.

I’ll have more to say about the economics about this on Thursday night. We’ll be listening too.