Give Raleigh Back to the Voters: Take the Survey and Make Your Voice Count 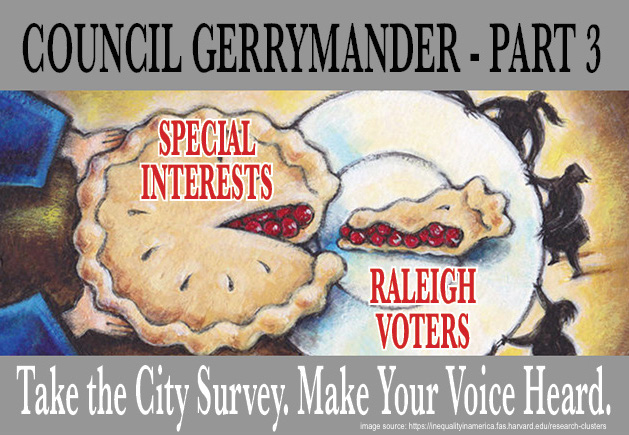 One Councilor has questioned this Council’s drive to gerrymander Raleigh elections. Read their Alternative Plan below to reduce the influence of special interest money and make Council more accountable to Raleigh voters. Then take the City Survey and make your voice count.
Take the City's Survey on Redistricting and Compensation Now!

by District B Councilor David Cox

The Future of Raleigh City Council

Recently the City of Raleigh began a poll regarding the future
structure and compensation of City Council. The poll asks five
questions. Before I present these questions, I want to first offer my
own opinion about the future of Raleigh City Council.

Raleigh is a big city. The latest census shows that 467,000 people now
live in Raleigh. Currently, Raleigh City Council consists of five
district Council Members, two Council Members elected at-large, and
the Mayor for a total of eight. Each District Council Member
represents more than 90,000 citizens. Thus, each district is as large
as a small city. And each district covers a large geographic area.
Raleigh’s total geographic area is 144 square miles. Each District
covers nearly 29 square miles. Despite the City’s growth both in
geographic area and population, the Raleigh City Council has remained
unchanged for 50 years.

Now is a good time to consider change and I propose that the City of Raleigh
should double the number of District Council Members from five to ten
and eliminate the two at-large Council Members. Doing so would
increase the Council from eight members to eleven. Moreover, this
change will greatly improve representation on Council and give even
more people the opportunity to serve.

I first ran for City Council in 2015. Running for Council can be a
daunting prospect. When running for Council you want to meet people to
tell them your story and explain why they should vote for you. I have
been extremely fortunate to have had a number of volunteers who
contributed countless hours knocking on doors in the extreme heat of
the summer months. And I have been fortunate to raise enough money to
pay the printing and postage to send mailers throughout my district.

But these expenses and the large population and geographic area are a
significant barrier to conducting an election campaign. Because of
these barriers most very qualified individuals never consider running
for public office. These barriers are a disservice to the citizens of
Raleigh because the field of candidates becomes limited to those with
deep pockets and wealthy contributors. It really is a fluke when
someone can run an effective grassroots campaign and actually win in
the City of Raleigh.

We can level the playing field a lot by increasing the number of
District Members from five to ten. Doing so will result in Districts
that are both half the size geographically and half the population.
Each District would have about 45,000 citizens or about 19,000
households. Smaller Districts eliminate barriers and make mounting
an effective campaign much easier thus opening the door to greater
participation.

Moreover, with more Districts, there is better representation. Rather
than the Council being dominated as it has been historically by individuals
who live inside the beltline, more districts will ensure that
representatives are elected from all quarters of the City.

More Districts also eliminate any argument for changing from two-year
terms to four-year terms. It is being argued now that it is too
difficult to run a campaign every two years. I argue that small
Districts make it much easier to run a campaign. Thus, any “practical”
need for four-year terms is eliminated. Moreover, two-year terms give
the People the opportunity to change Council and provide a check and
balance on elected officials – something very much needed in today’s
world.

And isn’t that the purpose of democracy? To ensure that people are
heard and are truly represented in the important decisions that affect
their day-to-day lives. And that those elected are held accountable
through regular elections.

Let me now return to the City of Raleigh’s poll about changing City
Council. Unfortunately, that poll does not consider the points that I
just presented. Instead, the poll presents far more limited choices.

Should City Council transition from two-year to four-year terms?

Should City Council increase its size to nine by adding one district seat?

Should City Council increase its size to nine by adding an At-Large member?

There is no option in this poll for adding more than one District
Member. Moreover, it asks if an at-large member should be added. In my
opinion, another at-large member would not increase representation or
participation on Council. Instead, it will result in a Council that is
dominated by the few who have the connections to wealthy donors to get
elected.

Today you can make your voice heard by answering this poll. I ask that you consider responding as follows:

Answer DISAGREE on changing from two-year to four-year terms.

While the last option doesn’t get us where we truly need to be, for
the purposes of this poll, it is, in my opinion, the best answer.

The remaining two questions on the poll concern compensation for the
members and the mayor. I offer no opinion on those questions.

To participate in the City of Raleigh’s poll, please visit this website: https://engage.raleighnc.gov/Q5453

Please pass this email on to others in your community.

Take the City's Survey on Redistricting and Compensation Now!

We look forward to publishing the views of the Mayor and other Councilors on this important issue.

* Gerrymander Part 1: Read about the huge special interest campaign donations in the 2019 election

Council Study Group on Redistricting and Compensation: summary of the recommendations and  full report .