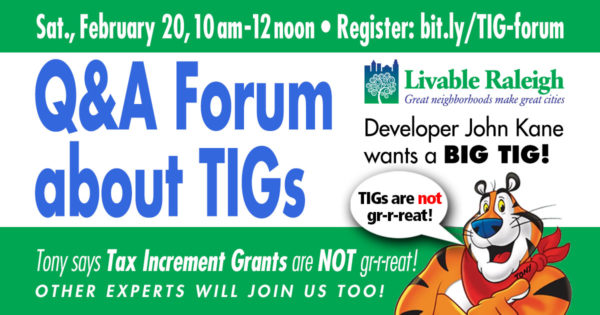 Tax-increment grants to developers have never been approved in Raleigh or Wake County. But developer John Kane is asking for a giant TIG for his Downtown South project, with the backing of Raleigh Mayor Mary-Ann Baldwin and Wake County Commissioner Sig Hutchinson.

We estimate that Kane’s TIG would cost the taxpayers of Raleigh and Wake County at least $450 million over the next 30 years. And if Kane gets a TIG, won’t every developer with political connections want a TIG too?

Livable Raleigh members Yevonne Brannon and Bob Geary will dive into what TIGs are and what they’re not with experts including:

There is no charge for this event. Hope to see you there!

You must register for the event