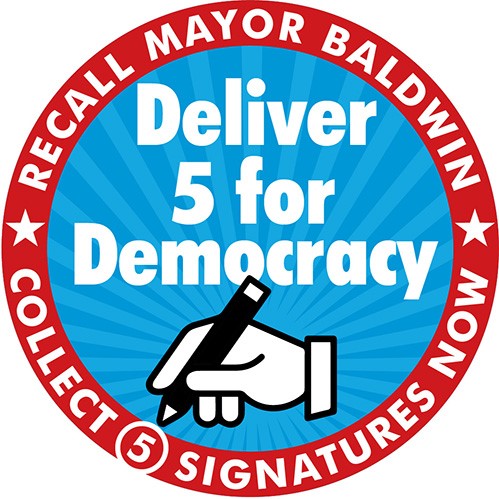 Livable Raleigh Moves to Phase Two of Mayoral Recall With the “Deliver 5 for Democracy” Campaign.

Over 1,000 of your neighbors have already signed – will you help advance the effort to save democracy in Raleigh?

Entering the second month of our campaign to recall Raleigh Mayor, Mary-Ann Baldwin, we have surpassed our first milestone of 1,000 signatures and are moving into phase two with our Deliver 5 for Democracy initiative.

We are finding that the people coming to our signing events want to do more. They tell us how much they love their city and how angry the mayor’s actions to exclude public input on many issues has made them. We are seeing an exponential growth in our following since launching the mayoral recall effort and we are going to harness that momentum to directly engage our more than 10,000 active subscribers.

Deliver 5 for Democracy will engage those citizens to carry the recall forward by each collecting five recall signatures among their friends and family. This community effort will empower folks to actively participate in their city’s destiny again after 20 months of this mayor and city council denying the public a voice in matters that affect everyone’s quality of life.

Join the Deliver 5 for Democracy campaign to recall Mary-Ann Baldwin by collecting five signatures from your friends, family, co-workers, or anyone else who loves Raleigh. It’s easy! See how Here.

Without being overly dramatic, the situation is dire, and your city needs your help. Mayor Mary-Ann Baldwin and the City Council have stripped democratic participation in all areas of public life. Read below for a list of the most egregious actions City Council has taken under the leadership of Mayor Baldwin:

Read more about “The Case for a Recall” here: The Case for Recalling Mayor Mary-Ann Baldwin

If you are reading this, you are one of our over 10,000-person strong base and you know that it’s time to take Raleigh’s democracy back. Together we have the power! If you have not signed yet, see here how you can easily add your voice.

If you have already signed, wonderful! But YOU CAN DO MORE by delivering five more signatures for democracy.

Bob Hall, Co-Founder of Democracy NC, denounced the Mayor and Council’s election actions this week by saying: “Respect is at the core of democracy. To not respect your citizens and to not bring them in and ask them, and talk to them about such a major, major policy decision is deplorable. It was just a con job to say that they had to postpone the election in the manner that they did. ”

You can read more of what Bob Hall had to say here: Respect is at the Core of Democracy

If you agree with Bob, please join us in holding Mary Ann-Baldwin to account.