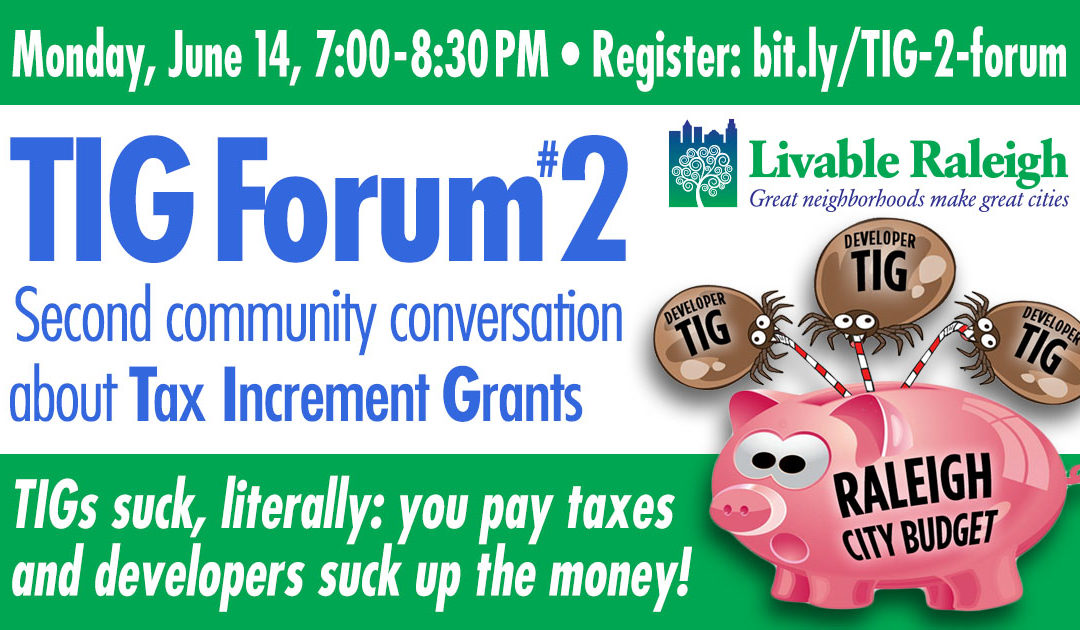 On May 4th Raleigh City Council committed up to $75 million, and probably a great deal more, to something it considers a high-priority need.

It sounds ridiculous. And it is.

Join our panel of tax policy and local government experts to learn all the details and get answers to your questions.

Register for this free Zoom event on June 14th at 7pm.

It sounds ridiculous. Nonetheless, Mayor Baldwin and her Council allies just approved a policy to hand the biggest developers in Raleigh a windfall. While you and I pay our property taxes on the value of what we own, under Baldwin’s scheme for so-called Tax-Increment Grants (TIGs), “select” developers would get 50-75 percent off their property tax bills for up to 15 years.

The bigger the project, the bigger the TIG.
The only limit on this boondoggle is a $5.1 million cap on total TIGs in a year, or no more than 2% of the city’s annual property tax revenues.

But watch for the sleight-of-hand. Within this “limit,” the current Council could immediately award $75 million to its favorite developers in the form of $5.1 million grants EVERY YEAR FOR THE NEXT 15 YEARS.

Put it another way: Council, with a simple majority vote, and no public input, could obligate the whole $75 million to a single developer, right now, and the rest of us in Raleigh would be on the hook to pay it for the next 15 years.

And what about that 2% limit? It’s as firm as a politician’s platform.

When the $5.1 million a year is spoken for, just move the 2% cap to 3% or higher and they can give more money away.

This is an unprecedented raid by the developers, abetted by Baldwin and her Council majority, on public funds that should be applied to real taxpayer priorities.

Can we nip this fiasco in the bud? Not while this Council is in office, apparently. But elections are coming. Which is why Livable Raleigh is holding a second Forum on TIGs on June 14 to sound the alarm and explain why Baldwin’s plan is not just misguided but an open invitation to political corruption.

You may hear Baldwin say that TIGs aren’t giveaways, and developers will need to “earn” them by adding extra “features” to their projects that the city or county wants. Baloney!

And join us June 14 as we lay out the case against this TIG plan and the politicians who either don’t get it or turn a blind eye.

Register for this free Zoom event on June 14th at 7pm.